Labor Day weekend in Santa Fe has everything to do with humans and despair:  the burning of Old Man Gloom, or Zozobra.  Happening Friday Sep 4th. This year, you can watch the spectacle online at KOAT beginning 8pm Mountain Time. Thankfully, no spectators allowed this year because of COVID-19 precautions.

Each year a huge 50+’ marionette is built, then stuffed with all our worries, anxieties, depressing thoughts—all our glooms—and then Zozobra’s burned away. The care and attention to detail in the event and the burning of Zozobra is uniquely New Mexican. Catch it when you can.

2019 Zozobra—one of the best events we’ve ever attended

Poetry book I’m currently reading: When the Light of the World was Subdued, Our Songs Came Through. US Poet Laurette, Joy Harjo served as Editor of this wonderful anthology of Native Nations poetry. The book contains poems dated as far back as the 1600s, and forward through the present day.

“It is poetry that holds the songs of becoming, of change, of dreaming, and it is poetry we turn to when we travel those places of transformation, like birth, coming of age, marriage, accomplishments, and death. We sing our children, grandchildren, great-grandchildren: our human experience in time, into and through existence.”—from the introduction by Joy Harjo

Meanwhile, I’m ambling through editing the middle part of my novel…

“It was much pleasanter at home,’ thought poor Alice, ‘when one wasn’t always growing larger and smaller, and being ordered about by mice and rabbits. I almost wish I hadn’t gone down that rabbit-hole—and yet—and yet—it’s rather curious, you know, this sort of life!”—Alice’s Adventures in Wonderland, by Lewis Carroll

Writers don’t fall into rabbit holes. Much like Alice, we leap into them to pursue answers, solutions, a bit of plot, a line, or piece of dialogue we can use.

We chase a piece of information, a thought, a feeling of something, for as long as it takes to understand what dared to take over a sliver of space in our minds; the thing that grew and grew until it filled and took over the space. We crawl back out of the hole wondering how many hours have passed, what day it may be, and what useful thing crawled out with us.

A lot of writers (me) love, love, love research. If you’re writing about the moon, you better know what it’s about, ay? The danger is when the research becomes a form of procrastination, or what Steven Pressfield calls Resistance.

There’s a secret that real writers know that wannabe writers don’t, and the secret is this: It’s not the writing part that’s hard. What’s hard is sitting down to write.

What keeps us from sitting down is Resistance.—Steven Pressfield, “The War of Art.”

Thus, some rabbit holes have nothing to do with the novel, poem, play. They are distractions that keep us from writing.

Rabbit holes can also be a kind of comfort against the onslaughts of a troubled world.

One Such Comforting Rabbit Hole: Pens, Of Course

A while ago, a fountain pen catalog landed in our mail box—not addressed to me but to the non-pen aficionado in our household. Crazy, ay? Naturally, I was the one who read the catalog.

In the catalog, the Aurora Duo Cart grabbed my attention. In the past, Aurora has done some cool re-releases of vintage pens.

Perhaps my only pen regret has been not grabbing an Aurora Archivi Storici 22 when they were released some ten years ago. Aurora had taken parts from storage belonging to an older pen known as the Aurora 88p. They turned those parts into the Storici 22. They were reasonably priced and sold out very quickly.

Why did I hesitate on the Storici 22? I didn’t like nib. It was hooded. Ugly.

A nib that is enclosed in a conical shell, or hood, so that the nib is all but invisible.

A piston-filling pen, the Aurora Archivi Storici 022, with hooded nib, came in brushed chrome or gold cap with a black barrel, and also chrome or gold matching cap and barrel. photo credit to FPN member ttakacs

Ugly? Looks quite handsome to me now.

And so… the new Aurora Duo Cart gave me pause. While it’s hailed as a re-release of a vintage pen, outside of the name and outer design, the new Duo Cart doesn’t have much in common with the old. The pen holds a single ink cartridge instead of the original two. The nib is steel instead of gold. (A saving grace is that Aurora still make their own distinctive nibs.)

The Aurora Duo Cart’s a decent pen. A good size with nice heft. It comes in a variety of colors.

Why Aurora bothered to call the new pen “Duo Cart,” well, I sure don’t know. Except that it did get the attention of dweebie me. So, good marketing ploy there, folks!

The original Duo Cart was released in 1954. The design allowed the pen to hold two (duo) ink cartridges in the barrel. When one ink cartridge ran dry, you flipped the ink holder around to use the other cartridge.

The first Duo Carts had the name “Duo Cart” imprinted on the nib section, along with a serial number. In 1956, a new Duo Cart was released, named the “888.” The 888 was styled after the larger Aurora 88 pen. It cost more than the original Duo Cart, and was not as successful as the more moderately priced Duo Cart pens.

The unsuccessful 888 is the more rare version sought by many pen collectors. Unsuccessful doesn’t mean non-functioning! The pen just didn’t reach a good place in the market at the time. All were well designed fountain pens.

In 1960, the Duo Cart was restyled again, and its name was shorthanded to “2 Cart.” The original Duo Carts also had a “student” or “junior” version of the pen.

The Aurora Duo Cart sent me down a long twisty path. Should I acquire an original 1950s Duo Cart, or the Storici 22, or an Aurora 88, or perhaps the 88p? Or the new modern Duo Cart?

Going deeper down the rabbit hole I even revisited other hooded-nibbed pens:  such as the Parker 51 and the Lamy 2000.

Considered an iconic American fountain  pen, the Parker 51 sucks up ink using an aerometric filler. That means the pen uses a sac to hold the ink. I despise pen sacs, no matter how iconic the fountain pen may be. So, no thank you.

Lamy pens always sound like good ideas until I put one in my hand. Truthfully, I’ve never met a Lamy pen I got along with. Ah well…

It turns out one of my favorite pens, the Pilot Decimo, also sports a hooded nib. Beautiful, too. 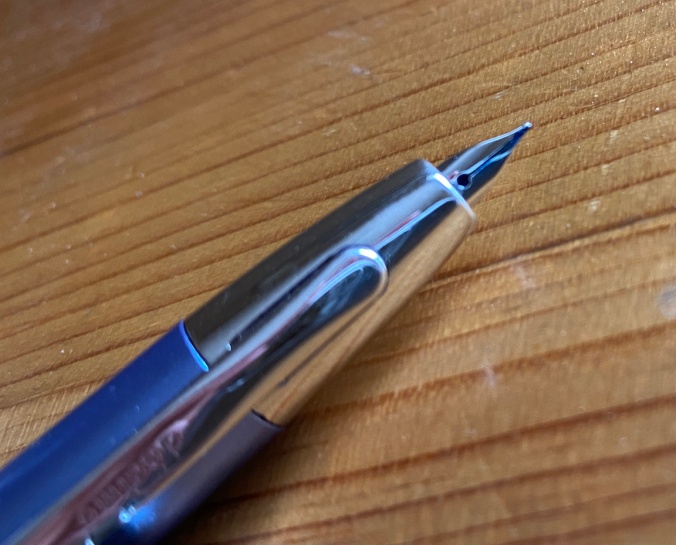 So hmmmm… it was silly of me ever so long ago not to grab the Aurora Archivi Storici 022—so what about a Duo Cart?

Sometimes when I climb out of such a rabbit hole, I continue on my merry way having exhausted my interest in what was being chased. However, this time I ended up with a vintage Aurora Duo Cart with a nice nib. I was fortunate to find my first color choice: black with a Nikargenta cap. 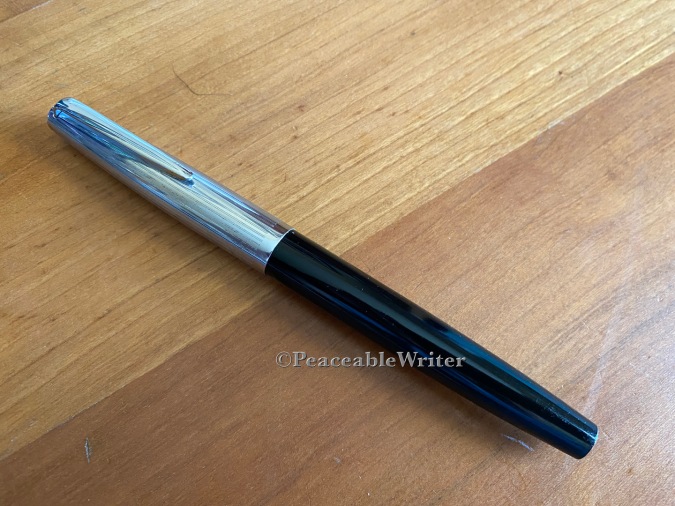 The acquired pen was made circa 1960. That’s the year Aurora imprinted the pens with an abbreviated “2 Cart” on the nib section. The company also modified the design slightly, lengthening the cap. (The first Duo Cart had a much shorter cap.)

“2 Cart” imprint inside round circle on nib section. The “2” is above the word “Cart.” Underneath the circle, the company name “Aurora.” Imprint isn’t crisp and is difficult to photograph w/my limited skills. I’ll keep working on it. 🙂

The pen had been used once upon a time. It was caked in black ink. All I had to do was soak the nib section for 24 hours to remove the old ink. Also, I gently rubbed some tarnish off the clip (using a Sunshine cloth). The pen has micro scratches, but is in handsome condition. The old 2 Cart writes perfectly, too. Not bad for a fountain pen that’s approximately sixty years old!

Even the old carts cleaned up well. I won’t re-ink these as I’m not sure how well they’ll last or perform with repeated re-inking.

Several years ago, Dillon Ang discovered that Platinum ink cartridges fit the old Duo Cart very well. The Platinum Converter is supposed to work too, but I haven’t been brave enough to force one onto the nib section.

Dillon warns that even though Platinum carts and converters work quite well, you must still take care in fitting them onto the old Duo Cart. The fit is tight, and you don’t wanna break your pen!

Platinum makes a cartridge adapter that allows you to use “international” ink cartridges. That adapter can also be used on a vintage Aurora Duo Cart.

I filled up an empty Platinum ink cartridge with my new “Santa Fe Brown” ink, and inserted it onto the ink nipple. A nice, secure fit. Sweet!

Platinum carts and converters can’t be used on the NEW modern Aurora Duo Cart. Parker converters and carts supposedly can.

It’s rare anymore that a rabbit hole excursion results in adding a pen to the tiny pen hoard. But vintage pens offer a sublime writing experience. The only other vintage pen in my stash is a Sheaffer Tuckaway that belonged to my best friend’s father.

In general, I rarely seek out vintage pens anymore. Sometimes vintage pens have “issues.” They burp, they leak, they don’t want to leave the house…

I’m hopeful the Aurora Duo Cart will prove trouble free. The idea that the vintage Duo Cart pen had used ink cartridges, and had no moving parts (no piston, lever, or whatnot to fill the pen), was appealing. The pen needed only a simple cleaning to get it writing. More to be revealed as I write along, ay?

I owe my understanding of vintage Aurora Duo Carts to Giovanni Abrate’s research. On FPN, user Diplomat has also done excellent, extensive research on the Aurora 88 legacy (of which the Duo Cart is part). Sometimes when the two researchers conflict, I default to Giovanni who has been a long time pen collector. He’s extremely knowledgable about Italian fountain pens and their history.

Now back to work!