At a recent fountain pen meeting in town, a penner talked about how much he loved the Rhodia Webbie and was using it in place of all other notebooks. More than one other person chimed in approval. Then they all declared their disgust for the Moleskine. (I’m just gonna call it the Webbie, okay? Everyone else does and I’m not gonna pretend I call it the Rhodia Webnotebook in my waking life.)

Nonplussed about their love for Webbies, I talked about my love for the Quo Vadis Habana notebook.

Last year, Karen of Exaclair generously sent me a Quo Vadis Habana along with a bottle of J. Herbin Larme de Cassis and the Clairefontaine Basic notebook. I reviewed the Basic last November. I never reviewed the Quo Vadis. I was not asked to and I have no real social graces about these things. You might not know this, but I was raised by a wild pack of dogs and they don’t use pens or paper. Even so, the exquisite Quo Vadis Habana became my most favorite notebook indulgence. So much so I sold hair and gold crowns to buy more. I love the Quo Vadis Habana in a bad way. I do not have my notebook life under control in the same way I have my pens under control. I’m working on it. I am a writer, after all, and paper is still one of my consumables. Plus I have this thing about wanting paper that is manufactured in a manner that is responsible to the planet. You know, that environmentalism thing. The Quo Vadis Habana and all things Clairefontaine make me environmentally happy. Fortunately for the Rhodia Webnotebook it contains paper made by Clairefontaine. If you care to, you can read more here about Clairefontaine’s environmental commitment here.

Back to the Present Moment and the Webbie

When Stephanie at Rhodia Drive announced a giveaway of the latest version of the Rhodia Webnotebook, I entered it because of those guys at my pen meeting. I wanted to see what the fuss was about. I rarely ever throw myself at a giveaway. Mostly because I don’t want stuff. And because I never win things. Okay, there was the candy Lady Dandelion sent me from Sweden, and then there was the dictionary that the American Theatre Wing sent me. But I still didn’t win a Webbie. But that’s okay because I have a life filled with Quo Vadis Habanas. (There are three.)

Then out of my blue, Stephanie emailed me asking if I wanted a large blank Webbie to review on Peaceable Writer. Uh… is this a blogger’s ethical dilemma? I don’t know because I can’t think straight: it’s Clairefontaine paper for God’s sake! Plus I get to tell the guys at the next pen meet I too have a Webbie. (Uh…not that I’m trying to fit in. I am an impossible fit!) So, no, I didn’t hesitate to say, “Yes.”

I did hesitate when she offered a 2nd Webbie for me to give away on Peaceable Writer. I worried I would keep it. Because like I said I’m out of control about my notebooks. There, having said that you have to promise to keep reading before I tell you if I said yes to that one. Or maybe come back tomorrow. Yeah, I’ll tell you then. Or next week. But maybe you already saw the above photograph of two of ’em side by side? *sigh. I am my own worst enemy.*

The Webbie(s) arrived soon thereafter having been sent via Karen of the U.S. mothership, Exaclair.

I wanted to use the notebook in some way that would show me how it held up under (my) normal working conditions. As the Habana aids my current projects, the Webbie needed to have a new project assigned to it. I finally came up with one, which means that over time the Webbie will have all its pages filled. But I’m sure Stephanie doesn’t want to wait until maybe the end of the year for me to write my review. Even if she didn’t give me any parameters because we know that wouldn’t be right, would it? And so I will give you my initial impression of the Webbie. (I know, I know, “Finally” some of you are screaming if you are still reading…) And then I’ll do another post (many weeks from now) after my project is complete and the Webbie has been through hell and back with me.

First, it’s hard not to like the Webbie because of its nickname. You can’t say it without a little smile. Even if you don’t show the smile on the outside of your face.

Second, the Webbie is a child of the Quo Vadis Habana. I mean, come on, look at them together:

They are very similar but they are not clones of each other. Then again, neither are mother and child.

The Rhodia similarities to the Habana: The quality of the paper inside. Smooth and a joy to write upon.

I have written ad nauseum here and elsewhere that we all have our own preferences when it comes to our paper, ink and pens. I like fine points or fine stubs in my nibs. I write fast in a weird combo of cursive and block lettering. I have a very light touch with the nib to the paper, even when writing fast. I use notebooks to write in: notes, scripts, stories and the like. I’m not a doodler or someone who draws unless it relates to what I’m writing about. (Uh…stick figure quality.) My pages are dense with words. Sometimes I glue scraps of paper in my notebooks. Sometimes I cannot read my own scrawl but that is not because of the paper or the ink or the pen.

My notebook biases are:

Writing in the Webbie

If you like off-white paper then the Webbie paper will suit you. Personally I find it a wee bit jarring.

Ten different pens and inks have been used thus far to write in my Webbie:

With one exception all my fountain pens have fine points. All those pens, even the Big Cat which can be kinda fussy with its goofy cheap nib, glided easily across the paper. 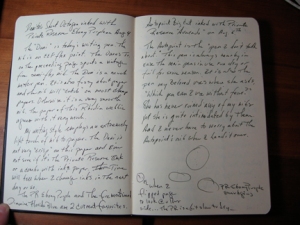 All of the inks used performed well with two exceptions: Private Reserve Ebony Purple and Diamine Chocolate. The PR EP was not crisp looking and was slow to dry and smudgy. The Diamine Chocolate was not crisp despite the Huron’s F nib. Both of these inks I would consider highly saturated and wet inks. But then so are the PR Avacado and the J. Herbin Eclat de Saphir, inks that fared just fine. To be fair, I tried the Danitrio with the PR EP in my Habana. While the writing looks crisper in the Habana (the white paper, you know) the ink was still a little smudgy.

I did not notice any “feathering” of inks. Nor is there any “bleed through.” Notebooker’s worldwide obsess about these two qualities of ink and paper. There is minimal “show through” of ink from one side of a page to another. Remember: light touch, dense writing, fountain pen ink.

I have always been curious about the “drag” that Stephanie is concerned with. Presumably we use similar inks and we both write very fast. The only drag I have ever experienced has been… well, I don’t know that I have. Mind you I’m not questioning her experience. I totally believe her so much that I watch for drag now. Yet this serves as another example to me that what is true for one is not true for another. Especially when it comes to fountain pens and ink and paper. Perhaps it is my very light touch in writing or the combination with my particular nibs. Perhaps I do not have the drag perception gene.

All of that was to write: I did not, do not, experience drag with the Clairefontaine 90g paper. Perhaps you will.

After writing for several pages in the Webbie, it no longer closes
shut without using the elastic band. This fascinated me so much I took a photo to share with you: 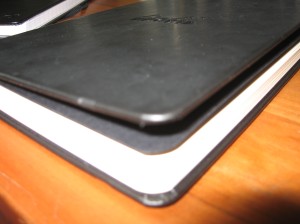 While Webbie lays flat while writing it did not close flat after writing a few pages.

My Habana closes flat every time without elastic help even though I’ve pasted scraps of paper into it, in addition to messing up the pages with words.

Cost value: The Webbie and the Habana cost more than cat food. Unless it’s some kind of prescription cat food. For a brief moment, despite the jarring ivory paper that some of you love so well, I pondered that if the Webbie were less than the Habana I might give up my Habana love. The Webbie and the Habana even cost the same (anywhere from $18-$20). I just have to figure out how to keep paying for them because they are worth it.

Given a choice.. six of one half a dozen of ivory paper vs. white? I’ll stay with the Quo Vadis Habana. If the Habana suddenly disappeared from the planet, I’d easily adapt to adopt the Webbie.

Currently the Webbie is gainfully employed as an “ink challenge journal.” More about that another time.

If you’ve read this far, you may now read about the Webbie giveaway!

Like me, some of the following reviewers have received notebooks as samples. I have to say that all of those listed below, freebies or not, vendors or not, all love paper and ink. In my book that counts for something good and civilized in the world. You have a brain and I hope you use it wisely.

And of course you can find all things Rhodia at RhodiaDrive.com.

21 thoughts on “Perhaps More than a Review: Rhodia Webnotebook Ver 3.0”

PW blogging since 2009. Thoughts & information shared freely without any compensation. Imagine that.