The Newton Shinobi fountain pen was the brainchild of FPN’er Inguz. He details his design thoughts and working with pen maker Shawn Newton in this June 2013 post. The first Newton Shinobi was made in black matte ebonite, with a red acrylic section. When capped, the red section leaves behind a thin, red ring, providing a very sophisticated look for the pen. Inguz wrote,

I called it the Shinobi, which is the [J]apanese word for Ninja because it’s stealthy but it ends in a bloody surprise.

Kind of gruesome? He’s referring, of course, to the red section of his Shinobi. I appreciate such inspirations, because, well, I’ve my own Banana Slug inspired Newton. Thank you, Inguz, for your marvelous pen design!

The pen has a cylinder shape, with a single flat side. That’s kinda nice, isn’t it? The pen’s got a built-in pen rest or roll stop. The cap and barrel are flush with each other; no lip.

Flash forward a year later to a visit from @trhall, aka my friend Thomas, with his own Shinobi.

The Shinobi is a pen which changes character depending on the material selected for it. That’s true of most pens, isn’t it?  A pen can look staid and business-like in one color or material, and all happy, jolly in another. 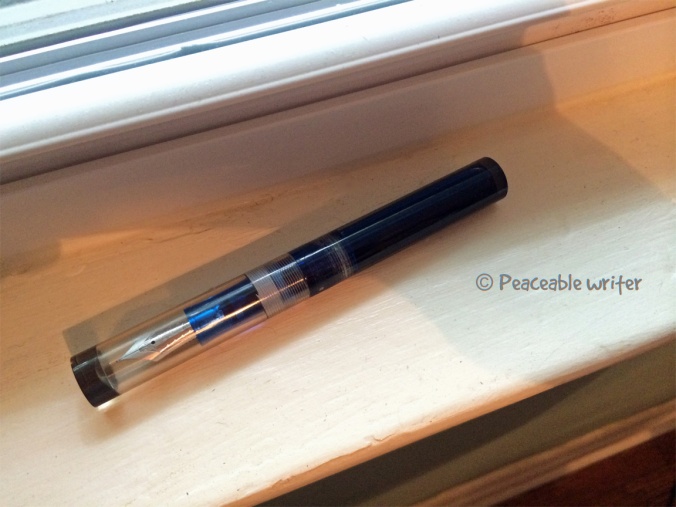 With the Shinobi up close, you see how exquisitely it’s crafted. Photos don’t do the pen justice. You gotta hold it! But then, I always say that about fountain pens, don’t I?

Thomas’s Shinobi sports a special nib and feed that he gave to Shawn to figure out how to install. Since he’ll blog about his Shinobi himself, I won’t go on about his pen except to say Thomas almost didn’t get to leave my house with it.

But then, hey, I remembered my own “orphan nib.” An 14K Japanese F nib complete with feed and section, but no pen body to use it with.  Would Shawn be willing to make my orphan nib and feed a new Shinobi home? Of course.

This particular nib, by the way, was a gift from a friend who had no use for it. I’ve tried using it in a number of pens, but frankly the nib lost some of its oomph with JoWo or Bock feeds. After spending a lot of time swapping Japanese nibs into one pen or another trying to use them with JoWo or Bock feeds—as in the PiloTWSBI pictured below—I’ve concluded nibs are at their best with their original feeds. You know this saying: “Leave the dance with the one who brought you.” Yeah, somethin’ like that.

The Shinobi solution seemed ideal: my Japanese nib with its original feed in a section designed to hold them.

Shawn and I settled on a transparent acrylic labeled “copper.” I was hoping for something on the amber side of things. There was some concern on my part that the copper might be a little too much on the orange side of things. Shawn told me he’d turn a piece of the material, and if I hated it we would find something else.

I sent Shawn orphaned nib and feed, and commenced to wait for the pen to come up in his work queue. That took a couple of months.

Shawn sent me a couple of photos. The color was indeed orangey, but not an ugly orange… so… why change it out? Sometimes it’s good to step outside your comfort zone. 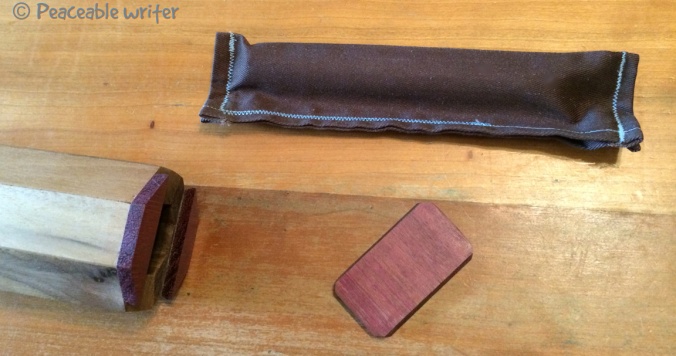 The Shinobi in copper acrylic is a shade of orange with hints of rose. Yes, just like copper! The color shifts from orange to orange-rose to red-brown depending on the light hitting the pen, or the ink inside it. All in all, very much an autumn tone pen. 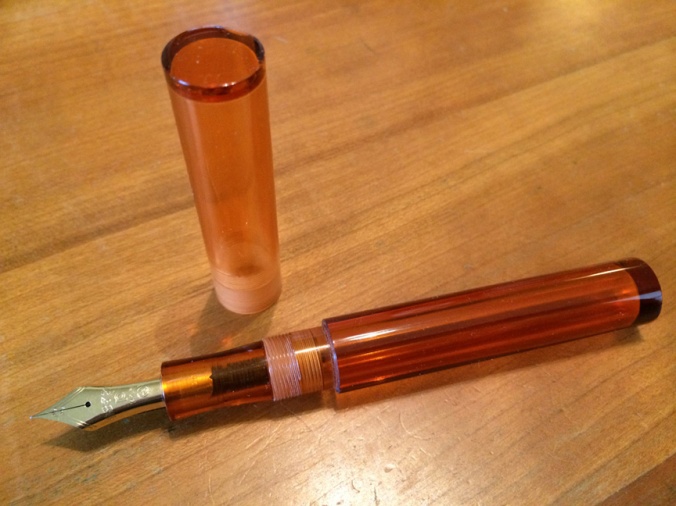 The nib and feed are friction fit into the section. There’s nothing for a converter or cartridge to hang onto. The only way to ink the pen is by filling up the barrel with ink “eyedropper” style.

What’s really neat about the pen is that even inked up, you can see the nib glistening through the transparent section.

My ink of choice for the Shinobi has been Sailor Doyou, a deep, dark brown-black ink. The ink brings out more of the brown-red in the acrylic. Handsome, ay? 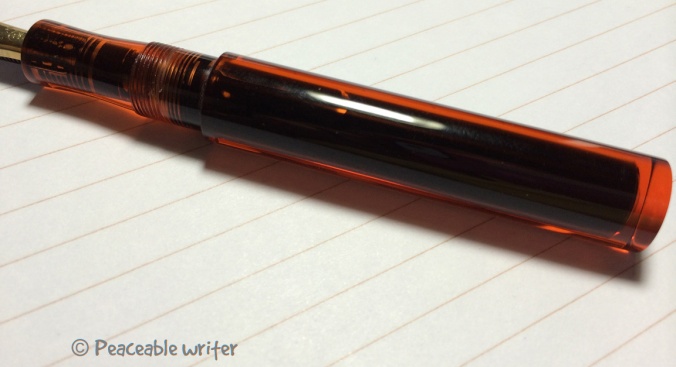 While there’s a “step” where the section ends into the barrel, at least in my small hand, the step isn’t felt when holding the pen. Nor is the edging of the step sharp to the touch. The section is nice and long, I think. Mine is 32.40mm (top of section to below barrel threads). The pen is not unlike the Danitrio Sho-Hakkaku. Thomas suggested this comparison to me. I thought perhaps he was hyperbolizing until I held his Shinobi. Here’s mine next to my Danitrio Sho-Hakkaku:

Lining up the cap’s flat end with the barrel’s flat end isn’t hard once you learn where to start turning the cap. Some people will obsess over this capping. Probably the same sort of folk who shouldn’t own pens made out of clear material that allows them to see all the nooks and crannies ink seeps into.

Because the nib and feed are friction fit, Shawn made a little knockout tool that can be used for removing the nib. The tool is a piece of metal that Shawn shaped to fit the end of the feed so that the feed won’t be damaged when tapping it out of the section. ‘Twas a lovely courtesy of Shawn to include the tiny tool in case removal becomes necessary.

A Bit about Flat Sides, Nibs, and the ED Thing

From an email exchange with Shawn, he explains how he made the flat side of the Shinobi:

For the flat I use a dremel rigged up to my lathe, and then I finish it out by hand.

A lot of us like faceted pens. I asked Shawn why he wasn’t interested in making pens with more than one flat side:

…I think it would be quite a pain to get the sides the same size and to get them to match up right.  I think I’d end up cutting through the cap into the threads, which I’ve done before with the Shinobi when I first started making that.   I think I would need some sort of cnc mill to get that right.

With one flat side it only has to lay with the nib up, so it’s pretty easy.  There is a lot of hand finishing for sure, and it takes a little while, but I’ve gotten better at it so each pen doesn’t take as long as the last.

Note: a “cnc mill” is a mill with computer numerical control.

For the record and for Newton pens, Shawn uses JoWo nibs from the US distributer, Meisternibs. JoWo nibs are excellent quality, and made in Germany. These nibs are what we see on pens by many of the major fountain pen companies; Edison, Bexley, Danitrio, and TWSBI, for example.

One of the features I like about my Shinobi is the section threading. The treading reminded me of a MacNiven and Cameron  eyedropper pen I once owned. In theory, didn’t require any silicon grease.

I grease the threads of all my eyedropper pens because I’m cautious that way.

I’ve flown with the Shinobi without problems, except for the one time I forgot to store the pen “nib up.” After a long flight, having stored the pen on its side in a pocket, there was a bit of ink seepage all over the threads. Something similar happened when I had Thomas’s Shinobi: carrying the pen on its side, going from warm to cold to warm environmental climates (aka home to the outside to the library), there was quite a bit of ink seepage around the threads. Let me emphasize, that I leave my Shinobi on its side a lot. That position in and of itself doesn’t create any ink seepage.

That’s why we say travel/carry your fountain pen “nib up,” my friends.

Minute drops of ink in the cap are a common occurence with most any fountain pen. When you have a pen made out of transparent material, you can see the droplets:

trhall’s Shinobi next to my own

In the above photo, it’s a trick of the photo that makes the Shinobi on the left seem longer than the copper Shinobi. They are essentially the same size.

Please understand that your Shinobi measurements may vary slightly. Such is the nature of bespoke offerings made one at a time. Plus, pen maker techniques evolve over time.

The pen was in solid use for four months before it left rotation. The acrylic cleaned up very well.

Shinobi all cleaned up

Shawn told me this was the first Shinobi to be made in all one color! It’s a terrific pen, and one of my favorites. How can it not be? It sports one of my all time favorite nibs, and Shawn tuned it beautifully. Honestly, I can’t say enough for how the nib has been restored to its true-nib-selfness. And the nib in question was previously tuned by someone else of great caliber.

The Shinobi’s a wonderful writing pen, but it’s also just plain fun to look at, and to hold in your hand. Ut oh. Distracting! Aren’t we supposed to be busy writing?

The Newton Shinobi was an unplanned fountain pen purchase for 2014. Unplanned yet welcome, and without regret. Yup, one of my most favorite fountain pens ever.

The Fewest of Links

PW blogging since 2009. Thoughts & information shared freely without any compensation. Imagine that.