☮ → The fix matters if you use the basic black acrylic Sailor Brush pen in eyedropper (ED) mode. (ED = ink directly in the barrel; not using a converter or cartridge.)

The Problem At Hand

My Sailor Brush pens got along as ED pens for many months without a leak. Imagine my surprise later on down the inky road, ay?

Guess the Universe looks out for nuns, children, and vandal pen users.

It turns out, the Sailor Brush pen’s barrel is not leak-proof, after all.

At the end of the barrel of the Sailor Brush pen you’ll find a groove. Before ever inking the brush pens, I loaded the barrels with water. When the barrel didn’t leak, I assumed the pen was held together well enough.

The barrel is made up of two pieces fit together with just a bit of adhesive. The barrel isn’t sealed to hold up to fountain pen ink. After all, Sailor expects us to use ink cartridges or converters in their brush pen. 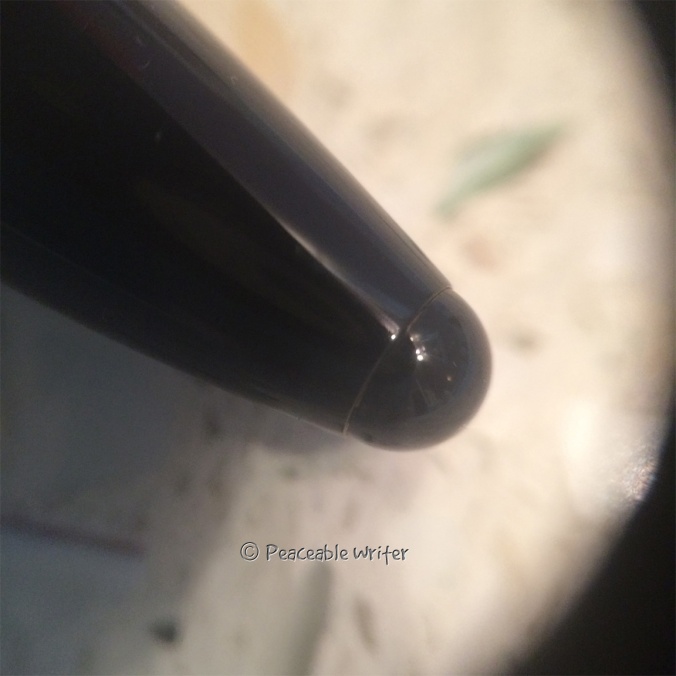 the groove at end of the barrel

☮ → Ink can ooze or even drain out from the groove where the two pieces fit together.

in the groove: Sailor Yellow-Orange

☮ → If you want to use the Sailor Brush pen as an eyedropper pen, you really have to seal the end of the barrel. If you don’t want to do that, you can use a cartridge or a Sailor converter instead.

The tiny piece at the end of the barrel is removable. The piece is friction fit, and held into place with a little adhesive.

To remove the barrel end, I used a small pair of Robo Grip pliers with a paper towel placed over the teeth. Anything thicker than the paper towel left me unable to feel when the plier’s teeth were in the pen’s groove.

Using only the first top and bottom teeth, I gave the end piece a twist to loosen it. Then, I pulled the piece out with my fingers.

Plier marks occurred on only 1 out of 3 vandalizing fixes

Once the barrel was apart, I applied sealant at the barrel end. After squeezing the tiny piece back on, and wiping off the excess sealant on the outside of the barrel, I let it cure for 72 hours before testing with water. (Curing should be sufficient at 48 hours. I was busy, thus the 72.)

What kind of sealant? Well, I wanted to use shellac (what master pen repairer Ron Zorn calls the “duct tape of fountain pen repair”), but it seems I gave my bottle away.

Epoxy was my next consideration, but what I found in my repair drawer was aquarium sealant made from 100% silicone.

Silicone sealant is not the same thing as silicone grease. The former is meant as a permanent seal, the latter is meant only to keep ink from seeping through a pen’s section threads. You don’t wanna use grease to address this issue with the brush pen.

The aquarium sealant won’t crack, shrink, or let water through a seal made from it. Unless I get carried away with a barrel brush, and rip the seal up. Because the silicone sealant is flexible, you can damage it with overzealous cleaning. Okay?

If you’ve a better method, by all means chime in with what you’ve done to your own pens.

I’m not recommending using aquarium sealant. While it’s kinda permanent, the seal can be damaged. Even an aquarium tank occasionally needs a new seal every 15 or 25 years. (Like, maybe from cleaning, or the tank not being level, and the seals shifting.)

So, hey, don’t complain to me if you use aquarium sealant, misapply it or mistreat it. You gotta do your own pen vandalizing, and own up to the consequences.

An epoxy that won’t shirk from contact with ink or water is on my shopping list as a more secure fix for the barrel piece. Or maybe shellac. One of those. Yeah. Somethin’ like that.

Meanwhile, yes, I’ve ED’d my Sailor Brush pens back up, and the aquarium sealant is holding. So far so good, though. No leaks.

I wasn’t able to take a useable photo of the inside of the barrel, either “before or after” the fix. Sorry, folks. If you could look down the barrel of my brush pens, you’d know how little sealant was actually applied.

highlighter at work with Sailor Yellow-Orange

You don’t have to ED the Sailor Brush if you’re scared. You can use a Sailor converter or cartridge to ink your brush pen.

The Sailor Brush pens as highlighters won’t appeal to everyone, but they’ve been wonderful highlighters for moi. I’m using them more than I even thought I would.

Recently, I bought some samples of the Sailor Storia inks to see if they’d work as highlighting inks. These pigmented inks are quick drying, and bright. I’m liking ’em. A lot.

I even bought another Sailor Brush pen. Or two. Quadruple the highlighting fun, ay?

The pens and I went on a road trip.

When we got to our destination, I grabbed my pen roll from the back seat, and noticed a large orange stain peering through the material.

All the ink had leaked out from the brush pen, but I couldn’t tell from what part of the pen. Into a plastic bag the pen and pen roll went to wait until our return home.

Once home, I found that the ink had leaked out from the bottom of the barrel. The barrel, as I’ve already mentioned, is made from two pieces of acrylic. The ink seeped through the connecting point.

Shortly before this inky event, my other Sailor Brush pen had a mishap. When it leaks, it pours?

Flying Through The Air

Continuing backwards in my telling of the tale: the next mishap, actually the first mishap, was all my fault.

And I tell you this part of the tale only in the spirit of full inky disclosure.

No photos were taken because I didn’t want to draw unnecessary attention to my plight during said flight.

There were no problems with the pens during three previous flights the brush pens took with me.

It was during take off on the fourth flight that Platinum Green highlighting ink leaked through my laptop bag.

I, uh, noticed when my legs turned green after having the bag in my lap during the flight.

The pens weren’t stored upright for the flight. I, uh, forgot. Yes, diligent, little moi forgot to keep all my pens nib up.

When flying, to prevent ink leaks or burps during changes in cabin pressure,—that is, during take off or landing—pens should:

I’ve had pretty good luck with partial ink fills in my fountain pens, as long as the pens have been stored nib up.

A quick examination of said Sailor Brush pen revealed the ink had leaked through the brush into the cap. One gigantic ink burp.

I put the pens in a plastic bag, stuffed a cloth into the pocket where the ink had leaked, soaked up the excess ink, and the damage was contained.

Have ya caught a common helpful tip in this post? Having a ziplock plastic bag on hand can be a pen saving moment. Especially when one’s spouse is beginning to eye one’s fountain pens as a crazy initiative gone horribly awry, requiring special laundry maneuvers.

Moral of the Story?

☮ → Sometimes what you think you know about your pens, turns out not to be true.

BTW: all ink stains were washed out from my pen roll, and my laptop bag. At least one of you was worried about that.

Your own experience is always welcome in the comments.

Have fun. Don’t be scared. Especially when writing. Or highlighting said writing.

Just roll with it. Or write with it. Whatever works. 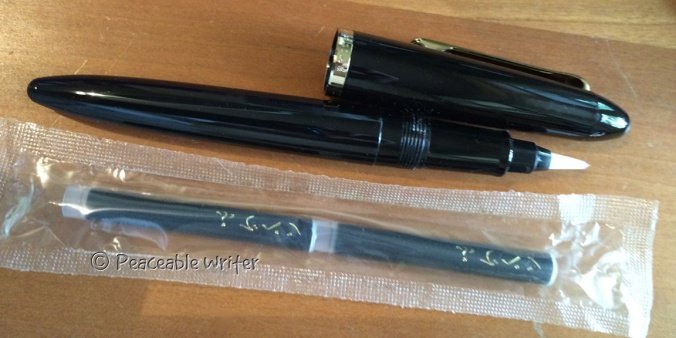 back of box…you knew that, right?

Poet Joan Mazza lives in Virginia and is a licensed mental health counselor. This poem appears in the anthology How To Love the World.