If I were a collector, engraved silver fountain pens would be among those I’d acquire. Engravings certainly reflect the tastes and styles of their eras. If an engraving is personal, the pen reflects something about the original owner. All tell a story; some obvious and some lost in time.

The Namiki Sterling Turtle is one of the sidekicks to my core group of writing pens. Great for letters, notes, or for when my outfit needs a little, uh, dressing up. 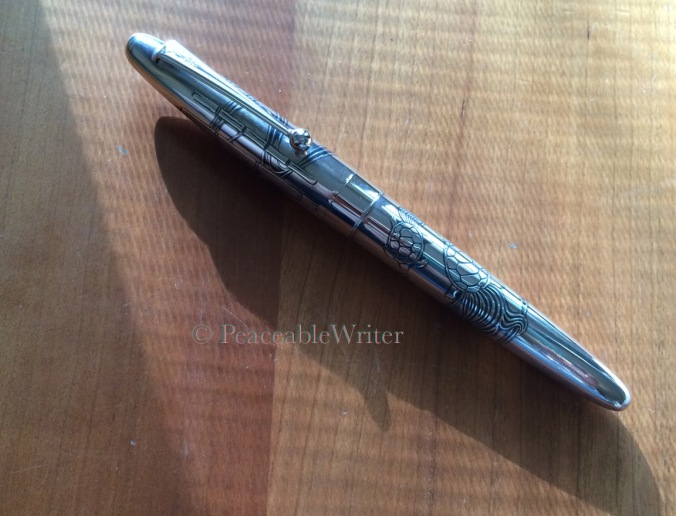 When a fountain pen retailer was closing out his online retail store, he sold his remaining stock of Namiki Sterling nibs. It’s not common to find spare nib sections for the Namiki sterling pens, and so I bought a broad nib of yellow-gold. A rhodium nib section wasn’t a choice.

Now I’ve two Namiki nib sections: the original fine nib that came with the pen, and the broad nib. That nib has been modified ever so finely into a custom italic by Deb Kinney, nibmeister extraordinaire. 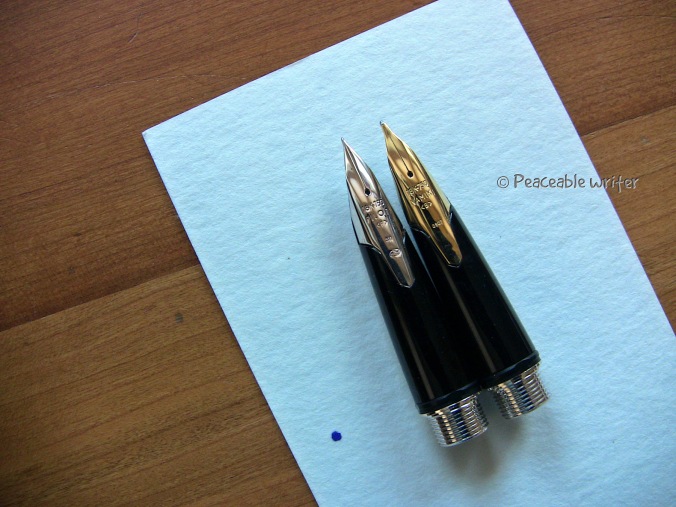 Because Pilot/Namiki imprints a date of production on their nibs, it’s easy to see that the two nibs were made four years apart. Cool, ay? The rhodium 18K fine nib was made in March 2011. The yellow-gold 18K broad was made in September 2007. I don’t know if age is important in this tale, but it’s of interest.

From the outset, using the broad nib would leave my fingers inky. At the tail end of the inset nib, ink was kind of pooling. Thus, touching the nib’s tail marked my fingers with ink. Try as I might to keep my fingers from the tail, inevitably I’d touch it. A wee bit of an annoyance, ay?

A Sterling’s inset nib doesn’t always eek ink, yet sometimes one will do so. The original fine nib of my Sterling Turtle hasn’t eeked ink at all.

Pondering how to cope with this inky problem, there were obvious options: contact the retailer to see if he might do something, or contact Namiki directly for a fix or exchange. Remembering someone had posted a fix for this Sterling inset nib inkiness, what else was a vandal pen repairer to do? Fix it herself.

It is only through failure and through experiment that we learn and grow. —Isaac Stern

Not everyone will want to attempt this kind of fix. It can be scary, especially on an expensive fountain pen. Sometimes I fix things knowing that if I screw it up badly, someone with greater skill can usually fix my vandalizing for a price.

Often DIY even succeeds. Especially when the path’s already been paved by others. In fact, a few years ago hari137,  a kind fellow on FPN, detailed his method for the fix. The instructions, along with his successes and failures, are very nicely outlined in a post here:

And, if at first you don’t succeed… well, you should know that I had to perform this repair twice.

The first repair held for a couple of years. Then, the nib tail began exhibiting ink again. Finally, one day when uncapping the Sterling Turtle, the nib came completely off the section. Bummer.

I’m not at all sure why my first attempt failed. Did I fail to mix the epoxy correctly? Was it crappy epoxy to begin with? Did timidity in applying the epoxy play a part? Dunno.

Diving back into the aforementioned thread, I decided to undertake the task again. The inset nib needed saving. After all, the nib had been reground by Deb. 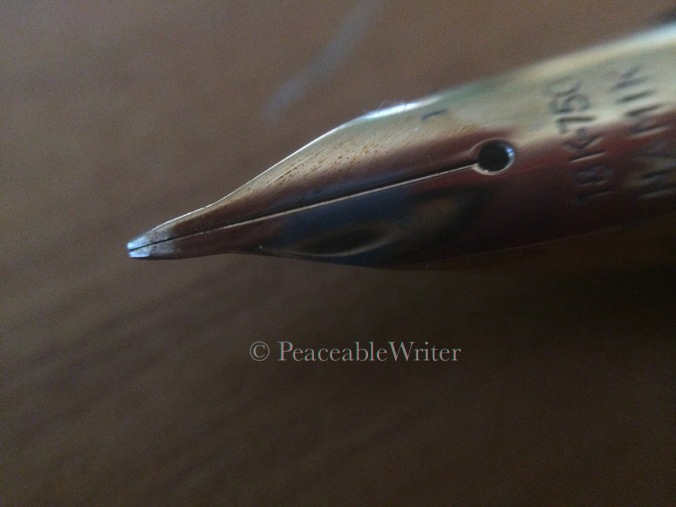 Several folks on FPN recommended a two-part resin epoxy made by DevCon. I made efforts to find that particular brand. Fortunately, a local retail store had it in stock.

I used a thumbnail to scrape off the older epoxy remnants left on the exposed section. Cleaned the nib up, too.

In applying the epoxy, the single most biggest caution is that the epoxy must not touch the feed or the slit in the nib. Otherwise, you’re screwed, right? A feed filled with epoxy ain’t gonna flow ink.

Although don’t is a word to use ever so sparingly:

This time around, I applied the epoxy more generously. I used a thicker layer, and wiped the excess off with a wet cloth.

The FPN user recommended cure time for the epoxy was 24 hours. It was 48 hours before I inked up my pen. I was a little nervous, ay?

I haven’t provided a step by step description on how to tackle the nib tail inky finger debacle because hari137’s already done that for you.

If you want to attempt this fix on your own Namiki Sterling, please read the entire original thread for all the details. Take the time, ay? Patience is the vandal repairer’s best friend.

The story of hari137’s experience came to the rescue. Thanks, good fellow!

For your enjoyment, a few more photos below.

You can see on the nib, how the ink made it’s way down to the tail end: 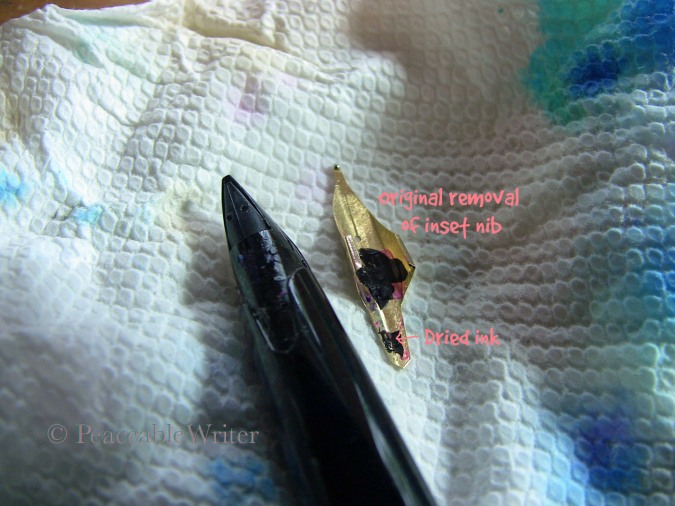 Some two years later… it all falls apart: 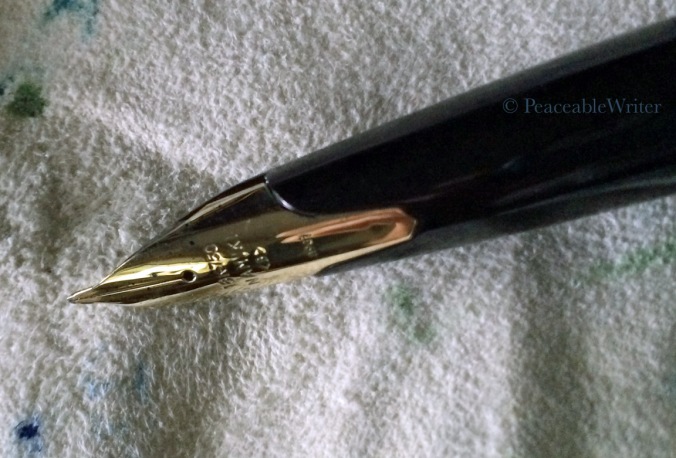 so far so good 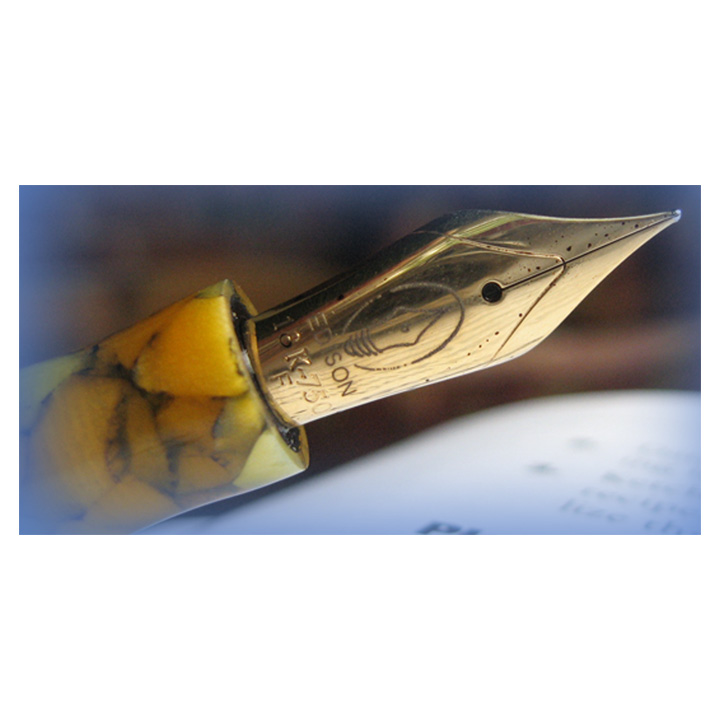