Some pen people keep a database to track their fountain pen collections. Back when I had a lot of fountains pens, I did too.

Since my collection has become smaller, a database has become…silly. Of course by some standards, even my current lot of thirteen pens would be considered “so many” pens. Or for those kind souls who insist “one or three is plenty,” my collection is out of control.

Sidenote: There’s a free desktop database available, created by “JonRo” of FPN. Can’t speak for Windows compatibility, but I do know the Mac version works through the Mojave release. An enterprising pen person is developing a mobile app for Android and IOS.You also can find that app on FPN. Remember: YMMV

One of the reasons my tiny hoard works for me is because I’ve collected more nibs than fountain pens. For example, there’s a single Pilot Decimo with three nibs—Fine, Medium Cursive Italic, and Broad. All get used according to mood or necessity.

Even though the nib lot is not huge, I track of them on a spreadsheet. It was this spreadsheet I turned to in order to inventory nibs on hand since we moved from Kentucky to New Mexico.

In my last post, I bemoaned a box of pen stuff that had gone missing. In that box were a few beloved and needed nibs. It was time to make a list of what had gone astray.

Yes, there’s a reason why some nibs were packed separately from their pens. It had something to do with what was drying in the window sill and what wasn’t. *ahem*

In the spreadsheet below, the blue colored rows indicate the nibs that had been packed into the missing box of pen stuff.

The “Pen” column notes which pen can use the nib. That is, I don’t have three Decimos; only one. Only one Danitrio Cumlaude, not two. I used to have a column that indicated nib tipping size, such as “.2mm” or “.5mm.” When I thought half my customized nibs were lost, that column got deleted. Such is the way of mourning.

These nibs represented a significant loss both in money invested, and the joy in the nibs themselves, some of which had been customized by Deb Kinney and Shawn Newton. Some pens could function by using nibs from other pens. For example, the Huron’s nib could be pulled to use in the Slug or the Franklin-Christoph. Many of the Platinum nibs could be used in the Danitrio Cumlaude.

The Danitrio has a custom section, made for me by Shawn Newton, that can use current production Platinum #3776 nibs and feeds.

All solutions somewhat painful, but doable.

However, among the missing was a particularly irreplaceable nib, an old-style #3776 Platinum nib for the Newton Shinobi. The nib also had sentimental value as it was given to me by a pen friend who has since passed away. The Shinobi was made to hold that nib. 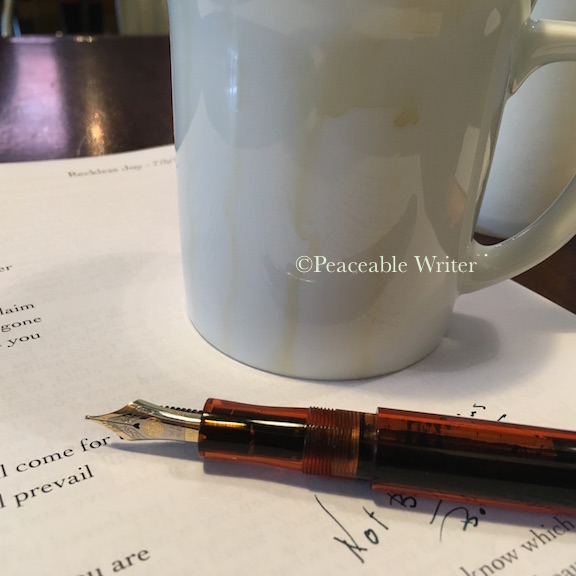 The old-style #3776 nibs are difficult to come by these days. The nibs are “long tailed,” and the feeds are different than those in the current Platinum Century #3776. A Century #3776 nib and feed won’t fit properly in my Shinobi section. 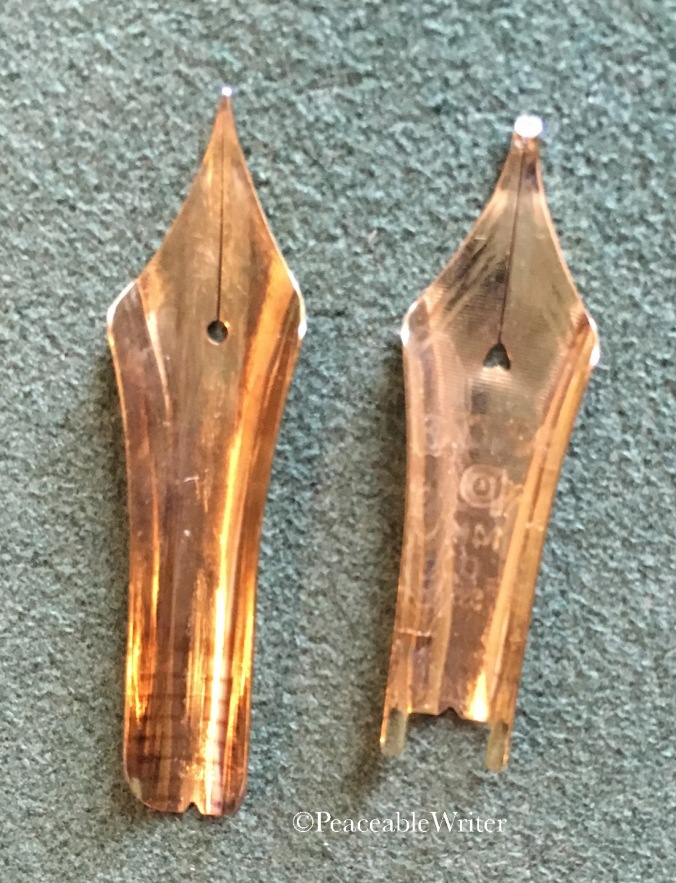 The Nakaya Chinkin Karakusa has a nib matching the profile of the missing Shinobi nib.

While in the past I’ve swapped the Nakaya nib into the Shinobi, I’m increasingly respectful of the fragility of the celluloid Nakaya. The nibs in both the Shinobi and the Nakaya are friction fit in such a way you can’t just pull the nib and feed out. You gotta use a hammer and a “knock-out” tool to remove nibs from either pen.

So… after chasing an old-style nib for a bit, I decided to move on. I contacted Shawn Newton about building a new Shinobi section around a JoWo nib. A nib that’s reliable, and easily replaceable if necessary.

I’ve two custom Newton pens in my tiny hoard. The oldest Newton is one I call the Banana Slug. It’s going strong at seven years old! The Slug was based on The Gibby.

The Newton Shinobi will turn six years old this year. I call this fountain pen, “the best pen ever.” It contains my favorite nib, holds a lot of ink, doesn’t roll off the table, and is gorgeous. 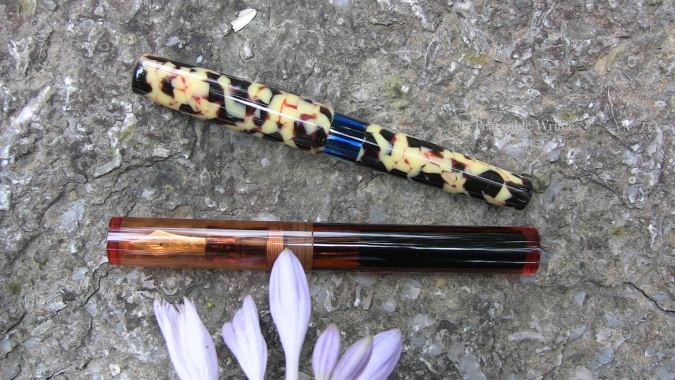 And then of course, there’s the Danitrio Cumlaude nib section that Shawn made for me about four years back. 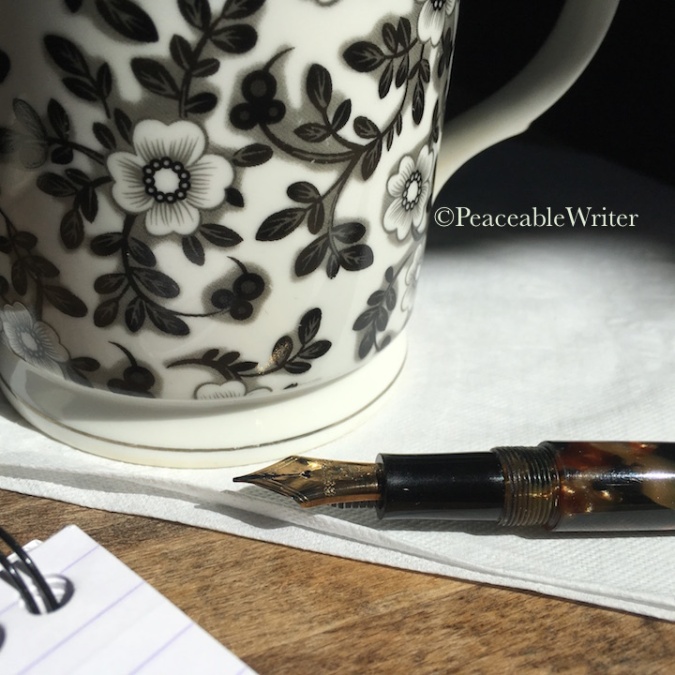 All of these pens have held up quite well. I love them. They’ve participated in many a writing session.

Shawn’s business has grown, and how he makes his pens has evolved. To me he’s more than a craftsman. He’s an artist among pen makers.

In our email conversation about the woes of my lost Shinobi nib,  I learned that Shawn no longer made sections to accommodate fitting nibs without a housing. The process for friction fit nibs and feeds was time consuming, and sometimes costly to his business.

Quite understandable. Yet I was still a wee bit sad, as one of my favorite aspects of the Shinobi was seeing the ink in the section against the nib. 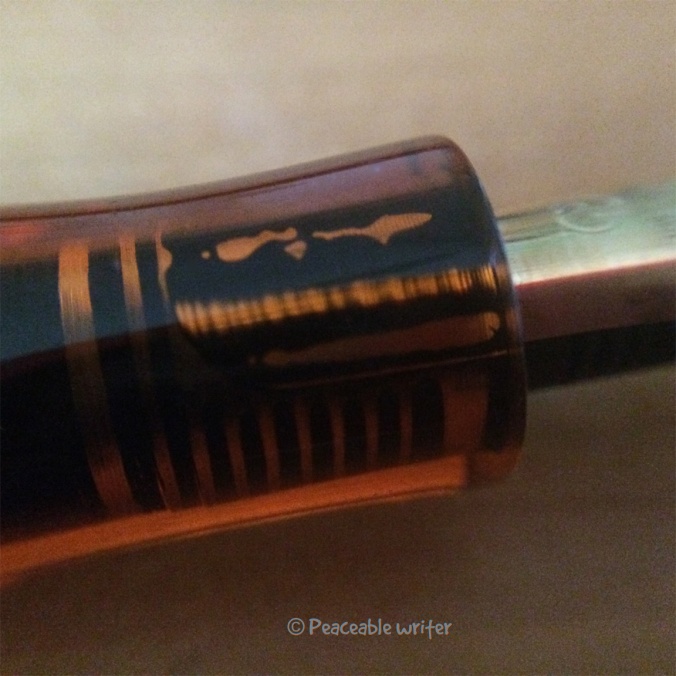 Shawn offered up an interesting compromise—a clear feed and collar instead of the standard solid black.

Example of a clear housing and feed:

JP6AX JoWo #6 in PenBBS in clear acrylic is now available on our website for purchase.

That’d be different but cool, right? My philosophy—change is inevitable; embrace it. Time to move on and get the Shinobi back to work.

And so… as I was explaining this new expenditure to my spouse, she suggested I look one more time in a moving box she felt had been neglected. It was a box of old film making equipment I had set aside, not wanting to unpack it. Mind you, I’d looked through the box twice. Yet… I’d never unpacked it. 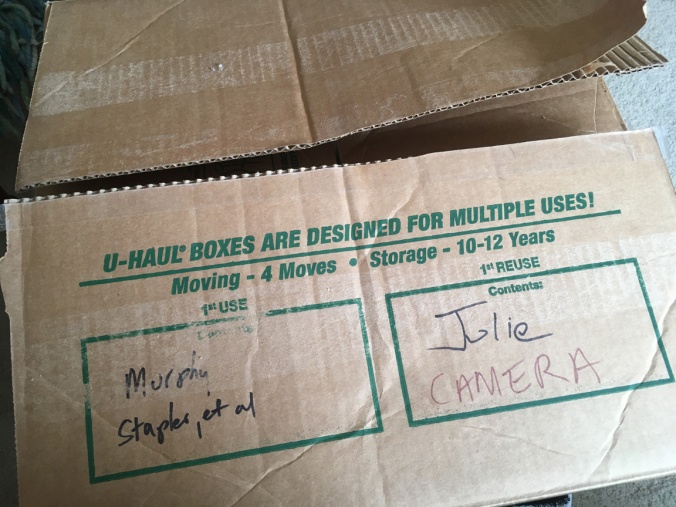 She was right, of course. I’m endlessly grateful for her intuition and patience.

The missing carton of pen stuff was at the very bottom of that large box. All Kinney custom italics, expensive nibs, and perhaps most importantly, the Shinobi nib waiting to be reunited with its pen. 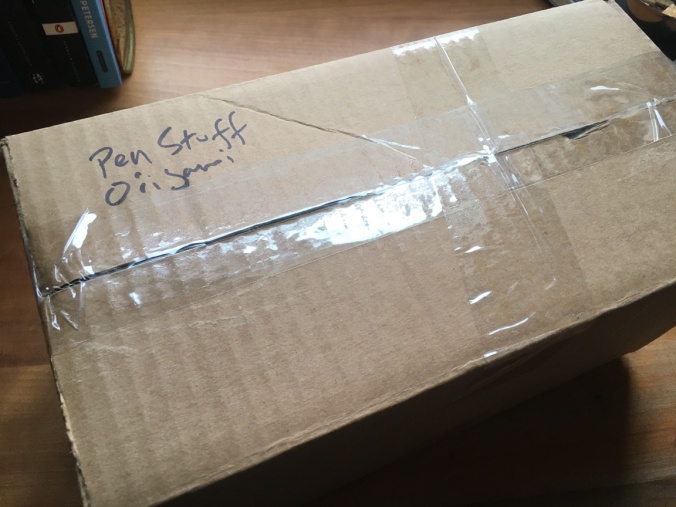 pen stuff, and oh yeah, the box had all the origami paper I was wondering about…

Funny how that happens sometimes. Once you give up something as lost, it can be found. 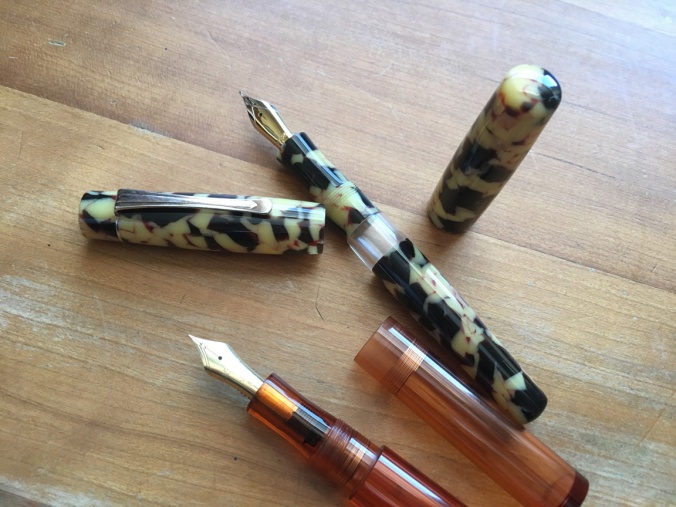 I was so relieved to find the all the nibs and “pen stuff.”

Normally meticulous about such things, I hadn’t made notes about what stuff was in which moving box.

We didn’t have that much stuff to move, after all. Or perhaps it was the speed with which we made the move to New Mexico. Dunno. A very happy ending for a ridiculously First World problem.

My beloved spouse wins the day for prodding me to rummage through that unpacked box. She’s amazing for many reasons. She even puts up with my pen obsession.

Shawn was super understanding when I told him the new section wasn’t needed. He even sounded as relieved as I was that the nibs had been found. What a great guy. I hated taking his time getting an order together only to have it tabled. He even gave me a sweet gift at the end of this debacle.

As much as this post is a tale about finding lost nibs, it’s also a love letter to Shawn and Newton Pens.

I’m thinking maybe a Pinnacle, if Shawn and Vanness Pens collaborate on another, or perhaps even a Prospector would make a good addition to the tiny pen hoard. We’ll see. A pen or two would have to be purged to make room.

More to be revealed as we write along, ay?

For friends who don’t know: Once upon a time, before he fell for pen making, Shawn was an art teacher. He continues to help high school kids through a 501(c)(3) college scholarship fund he’s created. He’s always giving back! Check out his eBay account where you can buy notebooks and postcards with original art on the covers/cards. All proceeds go to the scholarship fund.

4 thoughts on “Tale of a Vandal Pen User: Lost and Found”